Twenty years ago, the Russian national team won the European Youth Championship. At that time, the vector of American football development in the country was fully aimed at educating young players. Alumni of the Children’s American Football League have played a leading role on adult teams for decades, first as players, then as coaches.

In this draw of the Russian Championship, the average age of players in many teams either closely approached the 30-year mark or even passed it. Many people talk about the need to inject fresh blood into American football, but in practice, Spartak has gone further than anyone else in the Moscow region.

“Spartacus” currently has not one, but two American football schools for children and youth:

The first was opened on February 1 in Moscow in a new arena near the “Navatarskaya” metro station (in the summer, classes are held on the nearby college field). One of the captains of the Spartak adult team, Niko Kaishauri, became her head coach.

The second school opened on June 6 in the city of Korolev, classes are held at the “Pennant” stadium, the home arena of “Spartacus”. It was headed by the head coach of Spartak Ruslan Kurbanov.

An episode from a training session at the “Spartacus” children’s school. Photo: AFC “Spartak”

Trainings are held twice a week. It all starts with a general warm-up – exercises with the visual apparatus, vestibular apparatus and coordination exercises. Then you definitely need to run around and “breathe”, often in competitive form, relays, boats and confrontations against each other are arranged.

After that, there is a division into two groups – from 8 to 11 years and from 12 to 16 years. The exercises are all performed the same, but with equal build and capabilities.

The guys learn to catch the ball correctly, fix it, run routes, set their feet, and so on. At the end of the training, practice with the ball is mandatory, depending on the plan for the day, it can be both offensive and defensive work.

In the summer, all game moments were practiced through flag football (a non-contact version of American football). Since September, the coaching staff has been slowly introducing training in helmets and frames. Children learn to grab pillows, fall, group and get used to “armor”. 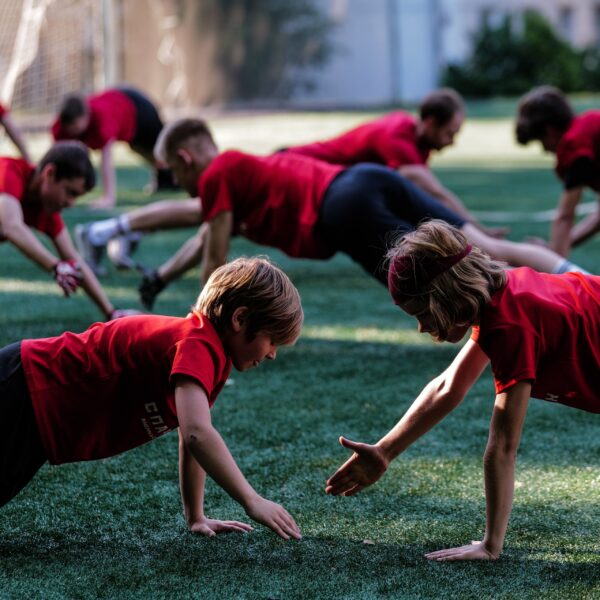 An episode from a training session at the “Spartacus” children’s school. Photo: AFC “Spartak”

At the same time, flag football is not just a preparatory part in the learning process, it is a separate important direction. Girls are recruited under him. Flag football is actively developing in Russia – right now the stages of the Russian championship, regional tournaments, Memory Bowl and so on were held. Thus, children will have the opportunity not only to train, but also in the near future to have the opportunity to take part in competitions.

No special equipment is needed to start studying at school, only shorts, a T-shirt and boots.

“Spartacus” believes that American football in Russia will be brought to a new level, including the pupils of their schools.